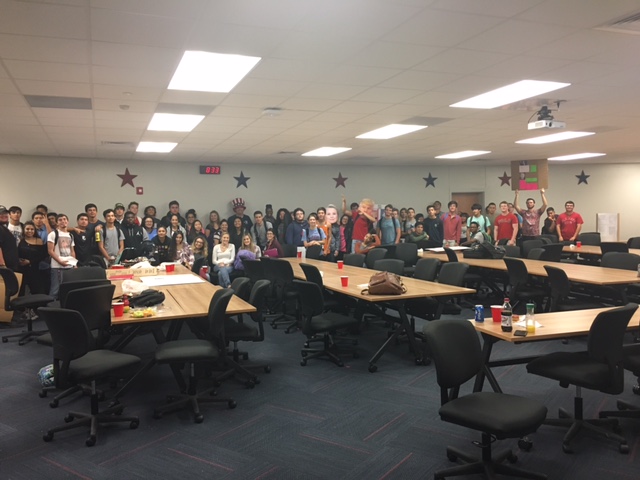 Students stand together before holding mock election Tuesday Nov. 8 in the teaching theater. Mr. Prieto's four government classes conducted online research to try and predict the outcome of the 2016 presidential election and also to gain a better understanding of how electoral activities work. "I like engaging projects like this one because they help students understand what is going on in the real world," senior Sterling Dienda said.

Students were required to create profiles and acceptance speeches for each presidential candidate and to research two assigned states and how they were expected to vote. At the end of the mock election, students casted their votes, electing Hilary over Trump 299-239. Their decision failed to predict the actual winner of the 2016 presidential race, however, as Trump won the electoral vote.

Prieto’s project was geared specifically towards helping students know exactly how the electoral college works – many students don’t realize that the public actually votes for delegates whose job is to elect the next president of the United States.

“Hopefully, my students will better understand the process of selecting a president and what goes in to it,” Prieto said. “Sometimes, it can be a little confusing since your vote doesn’t go directly towards electing the president.”

Since completing the mock election, senior Nathan Verdin and others have gained negative attitudes towards the electoral college and its place in modern elections.

“I think indirect voting is a bad thing because it’s almost like you don’t have a say,” Verdin said. “They’re basically picking for you.”

Because the mock election’s prediction was determined through online investigation, many were astonished later that day and the next morning when they realized Trump had defeated his opponent 290-228.

“I was researching and everyone was saying Trump had a ten percent chance of winning,” senior Elijah Bernal said. “I was surprised when Trump won because all the polls were saying Clinton was going to win.”

Students often exercise their political voice through social media platforms like Twitter, and in everyday speech, but not all believe that those opinions carry much weight.

“The majority of student political opinions are uninformed and are based off of biased twitter posts and their parents’ political beliefs,” senior Devon Tiemann said.

Prieto’s mock election allowed students to not only conduct their own research and form their own opinions, but to also get a taste of the excitement of political participation. Bernal claims opportunities like this might be the nation’s answer to a more politically active youth.

“America could get its youth more involved in politics by correctly informing kids at a younger age,” Bernal said.